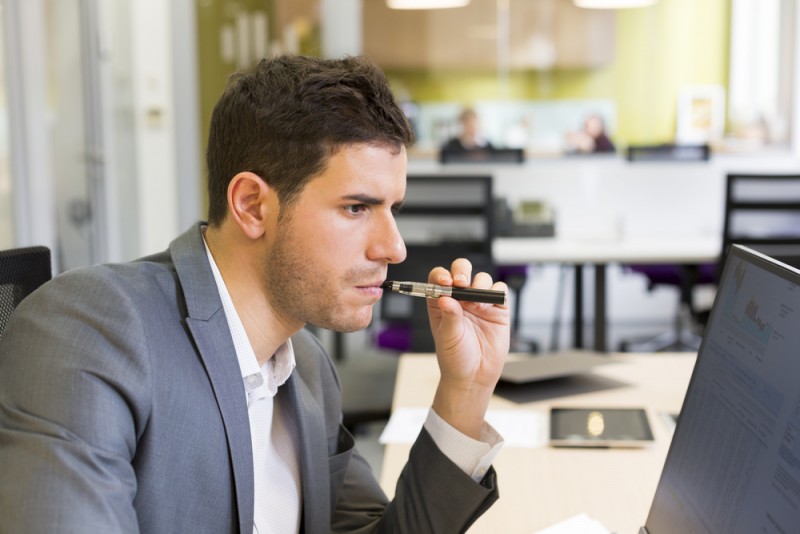 Released in July 2016, the guidance documents from PHE highlight the fact that vaping is not officially banned in public places. E-cigarettes and other vaping devices don’t burn tobacco and are therefore not covered by the smoking legislation of the Health Act, 2006.

The PHE guidance quotes recent evidence that vaping is believed to be about 95% safer than smoking. The public health experts also point out that the health risks for bystanders breathing e-cigarette vapour are “likely to be extremely low”.

The guidance goes on to make a forceful case, urging all UK employers to create a clear, well informed policy covering vaping at work.

The 5 principles of the PHE vaping guidance

With the estimated number of UK e-cigarette users now standing at 2.8 million, clear advice about vaping at work is long overdue. Background research for the new PHE advice on vaping in public places began in 2014. A number of stakeholders were involved in discussions, including health experts, academics, commercial organisations and consumer groups.

The 2016 outcome was a simple bullet-point guide for policy-makers. The one-page document, ‘E-cigarettes in public places and workplaces: a 5-point guide to policy making’ is based on 5 simple guidelines:

1. Make a clear distinction between vaping and smoking
2. Ensure policies are based on evidence of harm to bystanders
3. Identify and manage risks of uptake by children and young people
4. Support smokers to stop smoking and stay smokefree
5. Support compliance with smokefree law and policies

Whether you’re a vaper with questions about vaping at work, or an employer drafting a vaping policy, it’s worth taking a little time to find out more about each of these guidelines.

The difference between vaping and smoking

Point 1 emphasises the fact that vaping is very different to smoking tobacco. International research has actually found that the health risks from vaping are extremely low compared to the risks from tobacco smoke. 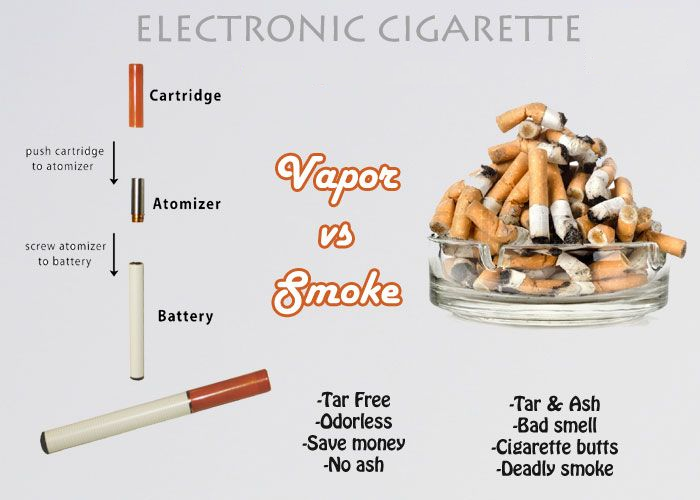 This part of the PHE guidance reminds policy makers that there is no UK legislation banning vaping in public places. It also reveals that e-cigarettes and vaping can potentially improve public health by helping smokers to quit cigarettes.

Most vapers already know that the clouds exhaled from e-cigarettes and vaping devices are mostly water vapour. The vapour also contains tiny quantities of glycerine, flavouring and nicotine. Nicotine is known to be addictive, but it doesn’t cause cancer. Tobacco cigarettes have been found to contain up to 69 cancer forming chemicals.

Point 2 of the PHE e-cigarette guidance reports international evidence that: “the risk to the health of bystanders from secondhand e-cigarette vapour is extremely low and insufficient to justify prohibiting e-cigarettes”. Public Health England urges employers to base their vaping risk assessments on the available evidence.

E-cigarettes – the risks to under 18’s

With thousands of eye-catching Internet images of cloud chasers blowing enormous vapour plumes, vaping is often seen as a cool activity by kids and teens. Due to the addictive properties of the nicotine added to vaping e-liquid, it’s illegal to sell vaping products to under 18’s in the UK. Advertising is also strictly controlled.

This all makes perfect sense, but point 3 of the PHE guidelines reminds policy makers that e-cigarettes help adult tobacco smokers to quit. In turn, kids are exposed to less second hand tobacco smoke. It also means that kids and young teens will have fewer tobacco smoking role-models. 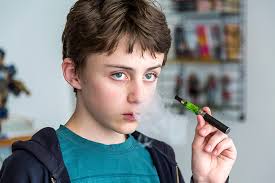 Health experts at PHE recommend that employers and policy makers try to strike a balance between children’s health protection and helping adults to “stay smokefree”.

Vapers can certainly help by avoiding vaping where there are children and impressionable teens.

That’s the advice from PHE in guidance point No. 4. Official statistics from the UK Office for National Statistics (ONS) showed that Great Britain had around 2.2 million e-cigarette users early in 2016. Incredibly, that’s about 4% of the total population!

In this bullet point, PHE asks employers to consider making it easier to vape at work. On a practical level, this could mean not forcing vaping employees to share a communal smoking space with cigarette smokers.

Many vapers would appreciate not being exposed to the cancer-causing smoke that they were trying to give up!

Keep the peace with clear vaping and smokefree policies

For many non-vapers the differences between smoking and vaping remain unclear. With the final bullet point in their vaping guidance, PHE urge employers and policy makers to comply with the tobacco related ‘smokefree’ law. As this law doesn’t apply to vaping, it’s very important that each organisation develops its own specific vaping policy and rules.

As well as laying down and enforcing the rules, it’s also essential that the rules are clearly understood by vapers and cigarette smokers in each organisation.

Vapers and smokers will all benefit from knowing exactly if, when and where they are allowed to vape or smoke around their workplace. A more relaxed attitude to vaping may even encourage more cigarette smokers to switch to a smokefree alternative.

If you are a cigarette smoker wishing to use a basic e-cigarette as an aid to quit smoking, just click this link to our range of simple, low-cost e-cigarette starter kits.

Public Health England have bundled their research, report and advice documents on a single web page here. These clear, simple guidelines should help to make it easier to draft an effective vaping policy for your own organisation.