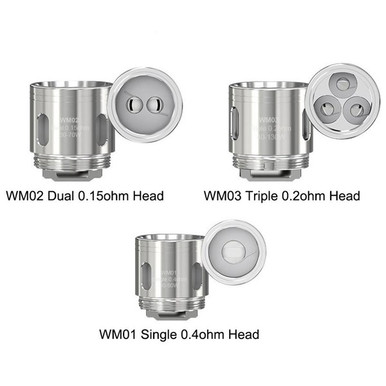 These replaceable Wismec WM Coil Heads are designed for use with the Gnome tank. This compact atomizer has amazing potential for vaping at power settings ranging from 30 to 130 Watts. Competing with popular multi-core cloud chasing coils produced by SMOK and other manufacturers, Wismec WM coils feature enlarged Stainless Steel barrels containing coils in a choice of 3 formats.

This single core coil head is probably the best choice if you’re more interested in flavour than cloud making. Open airflow gives this coil an airy draw, but a thick padding of organic cotton really soaks up the e juice. The end result is a delicious burst of flavour on the tongue. This 0.4 Ohm Kanthal coil can handle settings between 40 and 80 Watts. Wismec suggest trying 55 watts as your starting point.

The Wismec WM02 coil comes fitted as standard in a new Gnome tank. This has a dual vertical core format with a total resistance of 0.15 Ohms. This coil head demonstrates the spectacular cloud and flavour performance of the Gnome tank. The WM02 coil will appeal to cloud and flavour chasers. The recommended settings are between 45 and 60 Watts, but any setting in the 30 to 70 Watt range will deliver a satisfying vape.

Turn up the heat with this 0.2 Ohm WM03 coil head for your Gnome tank. This triple core coil shows just how much flavour you can get from a high-power vape. To get the most from this coil, Wismec recommend cranking up the power to a setting between 70 and 90 Watts. This big, juicy coil has a specified rating of 40 to 130 Watts.

Notes:
These coils feature Kanthal coil wire. This makes them suitable for variable wattage (or bypass) modes only.