Zoom the image with the mouse

With power ratings ranging from 25 to 130 Watts, this fabulous range of Joyetech ProC Coil Heads covers the full vaping spectrum. Offered in convenient 5-Packs, these replacement ProC coils are compatible with popular Joyetech tanks like the Aries, Motor, SE, and even the Remix RBA.

5 x Joyetech ProC1 replaceable coil heads (0.4 Ohm) - £11.79
Designed with a simple, single core, the ProC1 coil head is the ‘workhorse’ of the ProC range. The ProC1 delivers an airy draw for direct-lung vaping between 55 and 65 Watts. At these recommended wattages, the focus is on intense flavour. A test rating of 40 to 80 Watts challenges you to crank up the power for occasional cloud-chasing.

5 x Joyetech ProC1-S replaceable coil heads (0.25 Ohm) - £11.79
With more restricted airflow, the ProC1-S is designed for mouth-to-lung vaping between 30 and 40 Watts. The vertical coil format is almost identical to the standard ProC1 coil head. With an official rating of 25 to 55 watts, the tighter draw of these ProC1-S coils gives them superior flavour performance.

5 x Joyetech ProC2 replaceable coil heads (0.15 Ohm) - £11.79
If you vape for big clouds with lashings of flavour, ProC2 coils could be perfect for your Joyetech ProCore tank. With a low resistance of 0.15 Ohms, the ProC2’s dual vertical cores work at higher energy levels than the single core options. Rated for firing between 30 and 70 Watts, ProC2’s deliver top-class clouds and flavours at mid-range power settings.

5 x Joyetech ProC3 replaceable coil heads (0.2 Ohm) - £13.29
A maximum power rating of 130 Watts puts these Joyetech ProC3 cloud-chasing coils right up there with ‘Cloud Beast’ style atomizers from other manufacturers. If you find that full-power firing is a little too hot to handle, the ProC3 still chucks glorious clouds at recommended settings between 70 and 90 Watts. With a triple-coil core heating up the juice, this super-coil also scores well on flavour!

5 x Joyetech ProC4 replaceable coil heads (0.15 Ohm) - £14.29
Offering the best of both worlds, Joyetech’s ProC4 coils are designed for premium flavours in the 60 to 80 Watt power band. With a tested rating of 50 to 110 Watts, this quad-core coil head can also be pushed a little harder to produce masses of rich, dense cloud. This is one of the two coils shipped with the Cuboid 200 Watt starter kit.

Notes:
These Joyetech coils are designed for vaping at power settings ranging from 25 to 130 Watts. To avoid burned cotton, it’s important that you soak newly fitted coils with e liquid before vaping. The life expectancy of these coils will vary depending on the power settings used, e liquid types and your vaping style.

We only ship orders to UK and operate a Same Day Dispatch (99% of the time, sometimes delays may occur) on all orders placed before 4pm on working days (Monday to Friday excluding weekends & Bank Holidays). Any orders placed after 4pm cut off on weekdays (Monday to Friday) or over weekends, will be dispatched the next WORKING day. We do not dispatch goods over weekends or bank holidays and do not offer delivery on Bank Holidays.

When you place an order, we will estimate a delivery date for you based on the shipping method you have chosen. This is an estimation only and is not guaranteed delivery date. All orders are shipped in discreet packaging.

You may return most new unopened items (excluding e liquids) within 14 days of delivery for a full refund excluding our postage costs we have incurred. We'll also pay the return shipping costs if the return is a result of our error (you received an incorrect item etc.). If the item is reported as defective, we will check item for issue/fault before deeming it faulty.

You should expect to receive your refund within 7 working days of the return arriving with us and being deemed faulty, however, in many cases you will receive a refund more quickly. This time period includes the product testing and the time it takes your bank to process our refund request (3 to 5 working days).

If you need to return an item, please Contact Us with your order number and details about the product you would like to return. We will respond quickly with instructions for how to return items from your order. 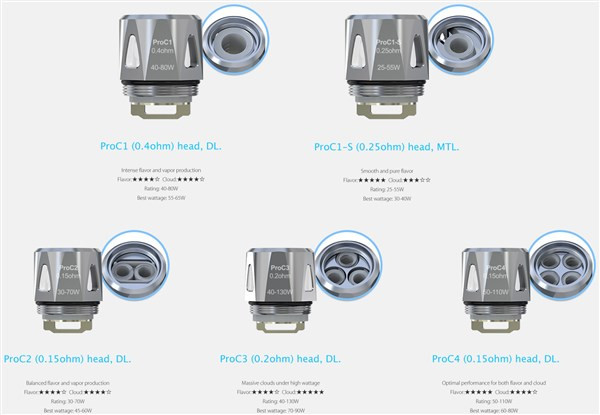