Electronic cigarettes, the delivery device for e juices or e liquids, have three parts to them regardless of the make or model chosen. A vape tank, chamber or reservoir or 'atty' holds or contains the e liquid and the capacity they hold will vary dependent on the type of clearomizers your using. Each e cigarette has a base which contains a specially made thread which connects the heating element to the battery and of course each e cigarette has a coil which is the heating element.

The coil is a heating element that is made of alloy wire that’s looped with one side attached to the positive charged terminal and the other being charged to the negatively charged terminal. The heat created by wire in turn vaporizes the e liquid it comes into contact with.

Some clearomizers have a single coil and others have a dual coil systems. This article explains the difference between the two and the pros and cons of each.

Pros of Choosing a Single Coil

*Only one coil is in contact with the e liquid and so the consumption of the e liquid is slower, making the e liquid last longer and basically increasing value for money. If the decision to switch from smoking to vaping was made to save money on your hobby, the value of single coils might appeal.

*E cigarettes with a single coil consume less battery power as they run at a lower power level. Indeed it may save anywhere up to thirty percent in battery power which lengthens the time between charges and extends the lifespan of the battery.

*Single coil configurations are easy to rebuild once they have been taken apart for cleaning etc. For novices or those who prefer to change the coil quickly should this be needed, a single coil would be a better choice.

*Many report that the thickness of the vapour that an e cigarette with a single coil produces is usually less dense.

*While there isn’t a very obvious difference in the time it takes a single coil to heat up as opposed to a dual one there is a difference as single coils do take slightly longer.

Pros of Choosing a Dual Coil

*Dual Coil e cigarettes usually produce higher levels of vapour as the two heating elements or coils are immersed and working to heat and release vapour at the same time, producing a greater volume to be inhaled and exhaled.

*On average the dual coil option delivers the same or similar levels of vapour however does so more quickly. This is due to having two coils working together faster than a single coil would, reducing the heating time.

*As the two coils in a dual coil configuration work faster and harder than a single coil the battery does run down quicker, needing to be charged more often, within a shorter period.

*Rebuilding a dual coil e cigarette is difficult unless you are especially skilled at this type of coil replacement.

Dual coil e cigarettes have a higher throat hit, a considerably higher vapour density, higher vapour temperature and the flavour intensity as compared to the single coil is again, higher. 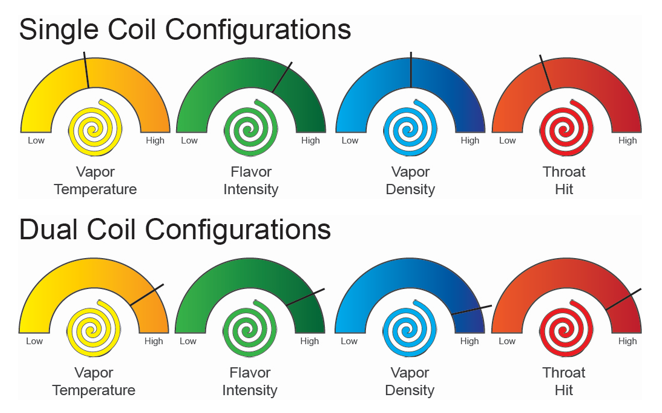 There are pros and cons to using both single coils and dual coils in your e cigarettes and so the best choice is the coil option which produces the benefits which best suit the individual. Some prefer a longer battery time over an intense flavour while other look for a lower level of throat hit over a higher vapour density. Trial and error, as well as recommendations are the best way to gauge which format will work best for you.