After months of rumour and speculation, the new Uwell Crown 2 finally arrived in the UK in June 2016. The Crown 2 had been one of the most eagerly awaited sub-Ohm tanks of the last few years. Will the Uwell Crown 2 steal the throne from the original Crown clearomiser? 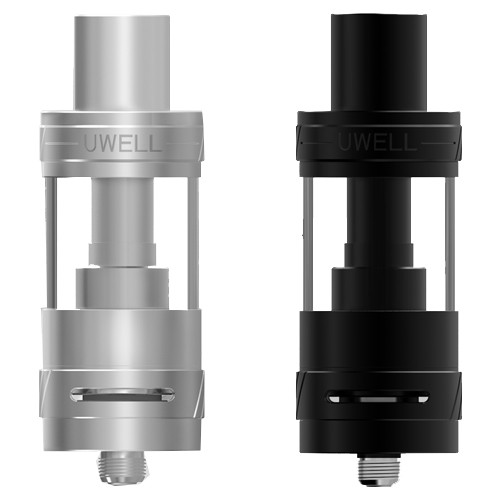 The original Uwell Crown was incredibly popular – not just with reviewers and vaping pundits. This was a practical, high-performance tank that proved to be a big hit with sub-Ohm vapers. Thankfully, it looks like Uwell have taken on board some of the minor grumbles and niggles that were raised in regard to the original Crown clearomiser.

Between the release of the old and new versions of the Crown, Uwell had also launched their Uwell Rafale tank. Unfortunately, the Rafale received a luke-warm response from buyers and reviewers. It’s not that this was a ‘bad’ tank – in terms of looks, it was a significant improvement on the old Crown. The main problem with the Rafale was that Uwell had ignored user feedback on the original Crown. Even worse, they also introduced new Rafale features that were clunky and annoying.

Rather than rush to release the new Crown 2, it seems that Uwell have taken plenty of time to develop and test their new refinements. In this review we’ll take a closer look at the Crown 2’s many new features. We’ll also compare the old Crown and Rafale tanks against the Crown 2 on flavour and cloud potential.

A look back at the original Uwell Crown

Although it was one of the best performing tanks released in recent years, the original Uwell Crown wasn’t the best looking tank on the block. The overhanging, heavily tooled top section looked pretty industrial. Even so, the design did offer vapers access to an easy and efficient top-fill mechanism.

The heavy tooling was also prominent on the airflow adjustment ring. Again, it was a very grippy and usable feature – it just lacked the smooth profile and good looks of some of the other tanks coming from Uwell’s competitors.

One of the finest features of the original Uwell clearomiser was the versatility of its dual, stainless steel coil heads. Stainless steel wire was an innovation early in 2015. As well as being compatible with both variable wattage and temperature controlled mods, flavour and cloud production were spot-on. For many vapers, this tank was delivering a superb vape – right through a wide range of wattage and temperature settings.

What was wrong with the Rafale tank?

While Uwell’s Rafale tank did have a really cool look and actually performed pretty well, users were unhappy about some of the basic features.

The top-fill mechanism had two tiny holes for e juice. Filling with a dripper was a messy chore. The Rafale tank was also prone to running hot. Much of the heat would be transferred to the wide-bore, stainless steel drip tip. The sizzling drip-tip was non-standard, so vapers weren’t able to switch to a cooler, Delrin tip.

Uwell’s answer to the drip-tip problem was to supply a weeny rubber condom to slip over the tip. Depending on your outlook, this solution was either comical or just plain annoying.

New refinements in the Uwell Crown 2

The first thing you notice about the Uwell Crown 2 is the stubby, wide-bore drip-tip. Closer inspection shows that this has a steel tip mounted on a standard, 510 Delrin base. The Delrin insulates the tip from the tank and neatly side-steps the overheating problems encountered with the Rafale. If you’re not a wide-bore fan, you can easily switch the stock, Uwell Crown 2 drip-tip for any other standard 510 type.

The Uwell Crown V2 has a smooth, sleek design all-round. The design is clearly based on the Rafale tank’s good looks. Gone is the industrial tooling on the top section and airflow ring. This is replaced with a delicately engraved, rather arty grip. The top section proudly displays the ‘UWELL’ branding – elegantly engraved into the stainless steel. 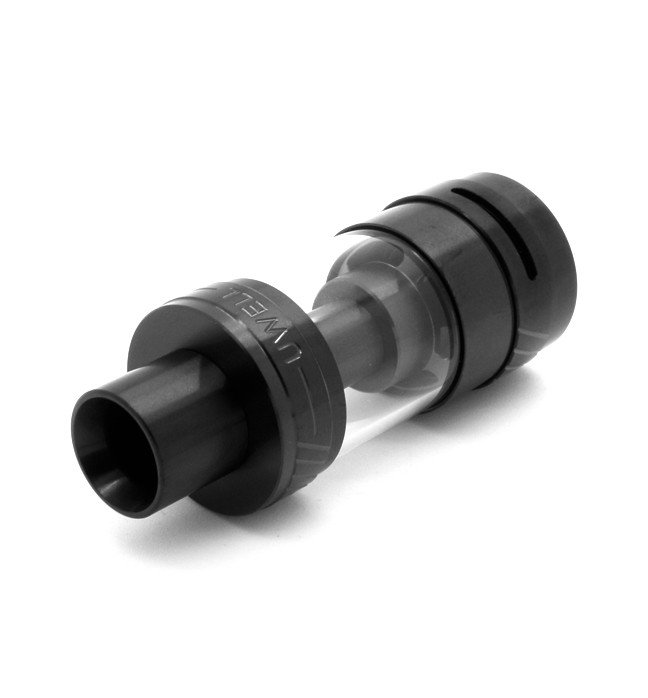 One single turn of the top section now gives you access to two extra-wide, top-fill ports. This is a smooth operation that’s actually quite novel and fun to try. Filling the tank is a dream compared to the Rafale fill mechanism.

When you do your first e-liquid fill, you immediately notice the new tank’s locking screw. The lock screw is seated in the chimney. Practically, this means that it’s now impossible to accidently loosen the tank section while refilling. It may be a little over-the-top for most vapers, but it’s still pretty easy to remove the screw when you need to give the tank a good clean. Just remember that the screw has a reverse thread.

While you’re checking out the chimney in the Uwell Crown V2, you’ll notice that the annoying spit-back protector has finally been removed. The open airflow certainly seems to make the new Crown tank run a little cooler. This bold move gets a ‘thumbs-up’ from the team here at GoSmokeFree.co.uk.

To match the new tank’s classy look, the airflow ring now features two long, slim cyclops ports. The ring comes with the same click-settings as the original, but also features stops at the fully open and closed positions. This arrangement helps to make the tank really versatile over a wide range of wattage settings.

The coil heads in the Uwell Crown V2 have been given a radical redesign. The new look is easy to spot if you check the positive terminal on the base of any Crown 2 coil head. This features a weird, conical arrangement that’s designed to dramatically improve airflow. Unfortunately, the new improvements mean that the earlier Crown and Rafale coil designs aren’t compatible with the Uwell Crown 2. 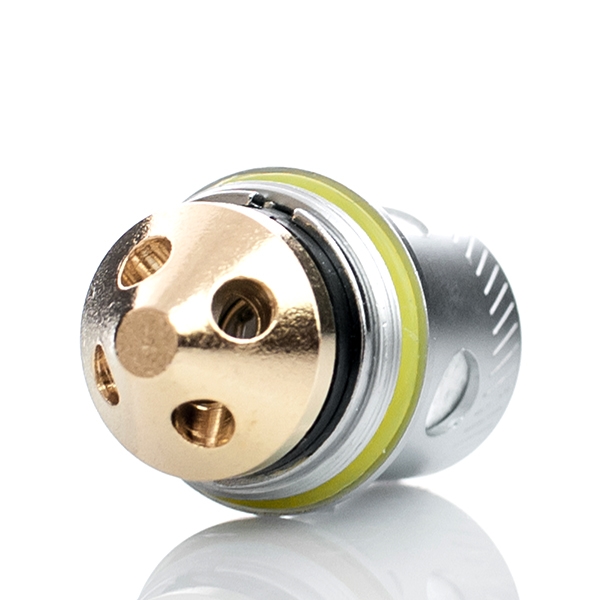 Currently there are 3 replaceable coil types available for the Uwell Crown 2, including a 0.8 Ohm Kanthal coil for everyday vaping. Stainless steel coils for the Crown 2 are available with a resistance of either 0.5 or 0.25 Ohms. Upper wattage limits are 80 and 100 Watts. As always, if you vape at a lower wattage your coils are going to last a lot longer. The original Crown tank was famous for the long life of its excellent coils. Right now it’s too early to tell if the new Crown 2 tanks are going to give the same level of performance. Early indications suggest that the new coil heads are performing really well with the Watts set low.

Vaping with the Uwell Crown 2

The original Crown tank delivered a superb vape, with the main compromises being a slightly dodgy drip-tip and a clunky design. We find that the Uwell Crown 2 gives a very similar vape, with distinctly better flavour and cloud volume at lower wattage settings. There’s also a definite improvement in airflow. This gives a smoother overall feel to the vape, through the full wattage range of the Kanthal and stainless steel coils.

Offering such an aristocratic vape, the Uwell Crown 2 clearomiser looks set to become a popular addition to the respected Crown dynasty. This is a versatile, thoughtfully designed tank that delivers on every level.